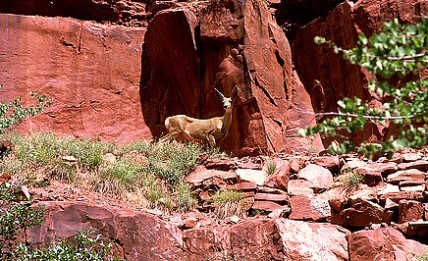 Southern Utah is home to several national parks; it is also home to a great variety of wildlife. In fact, Zion National Park is home to many different species of animals. Zion National Park Animals include large predator cats - like cougars - live in the park but are hardly seen. Some of the more commonly seen animals are desert cottontail rabbits, squirrels, lizards, frogs, and members of 250 species of birds like the American dipper and black-headed grosbeak.

Visitors who travel through the magnificent area in south-western Utah known as Zion NationalPark, they are often treated to a animal sighting. This is due to the fact that 75 mammals, 271 birds, 32 reptiles/amphibians and eight types of fish call Zion National Park home. 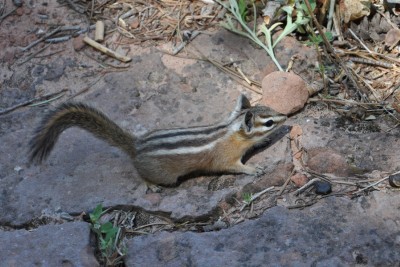 The most common mammals seen at the park are common squirrels and mule deer. The squirrels are friendly and love to chatter with their human guests. However, visitors need to be cautious when dealing with these furry friends as they can anger quickly and have been known to bite on more than one occasion.

The silent and graceful mule deer can usually be observed from a short distance. They are most commonly found grazing in one of the many meadows within the park or along the roadside. Some lucky campers have even been woken by a curious mule deer coming in fora sniff. As with all of the mammals livingin Zion National Park, mule deer should not be fed by humans. Human food is not healthy for wild animals and can lead to an animal becoming dependant on humans for food. In such cases, the animals become either a nuisance or danger to park visitors and will have to be destroyed.

Many others mammals that can be seen at ZionNational Park include: 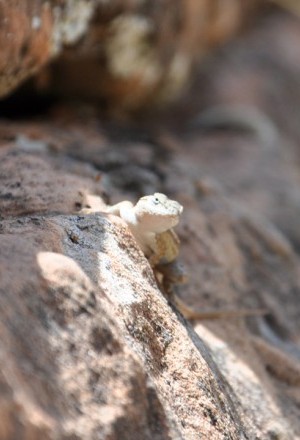 Reptiles, amphibians and fish are also found in the park. Some of the creepy crawlers and slimy swimmers found in the area include:

While there are many, many types of birds living in Zion NationalPark the two most commonly seen birds are wild turkeys and ravens. Wild turkeys can be seen at any time of day. However, the birds are known to gather together near the cabins during the early morning hours. The birds are friendly and will usually let children chase them off some distance before taking flight.

Ravens are large black birds resembling crows. They can be seen in abundance throughout the southwest and south central areas of Utah.

Some of the more uncommon birds that can be seen at Zion National Park include:

Every visitor to Zion National Park is sure to have more than one encounter with the local wildlife that’s worthy of a Nature Show. Here are a few safety tips to remember when having a close encounter in the park:

Always remember you are their guest and Zion National Park is their home; treat the animals with the consideration and respectthat they deserve. That way everyone involved will stay healthy, happy, and have a wonderful experience.